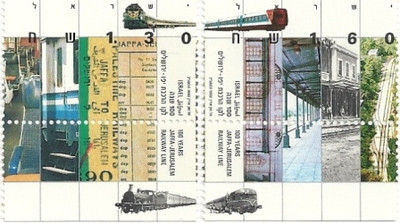 Road and rail links through the centre of the land to the coast have been an important development in the latter-day re-establishment of the State of Israel. It was in 1868, under the Ottoman authority, that construction of a proper road from Jaffa to nearby Tel Aviv was commenced, and in 1892 a single track, narrow guage railway was built. These two events secured the growth and development of Jerusalem and provided for later transport extensions.

The four colourful stamps in the series issued in June 1992, commemorate the 100th anniversary of the Jaffa/Jerusalem Railway. Each stamp is divided into four parts.

The 0.85 stamp displays part of a drawing of the "Baldwin" engine (made in USA, 1918); greasing the wheels of a steam engine; a diesel-electric locomotive of the type in service on the line today; a passenger train climbing the bends of the Sorg River on the way to Jerusalem. Above: a modern engine manufactured in USA (3000hp.). Below: a steam engine built in Great Britain in 1942 and taken out of service in 1958 (no. 70414).

The 1.00 stamp shows a junction in Lod station; a mechanical signalling with a semaphore arms in Lod station; an electric signalling board in Tel Aviv Central Station; a railroad layout map in Lod station. Above: a steam engine built in Scotland in 1935 (wheel classification 4-6-0). Below: one of the first five engines to operate on the line (2-6-0).

The 1.30 stamp shows part of the passenger timetable (1926); a train ticket for the Jaffa/Jerusalem line (before the founding of the State); a renovated passenger car; the interior of a passenger car. Above: a modern diesel locomotive (2000hp.). Below: a steam engine (0-6-0) and passenger cars that were built in Great Britain at the turn of the century. Some of the cars were in service until 1962.

The 1.60 stamp shows Bar-Giora station; the railway station in Jaffa at the beginning of the century; a covered platform at Lod station; a frontal drawing of the station in Jerusalem. Above: one of the eleven railcar sets built in Germany in the 1950's (1000hp.), which was taken out of service in the late 1970's.