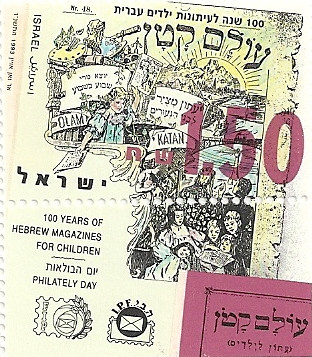 This is an unusual and remarkable stamp which commemorates the centenary of a phenomenon unknown to the general public - the considerable contribution and influence of these children's magazines towards the birth of a language as the prerequisite to the rebirth of the nation.

The pictorial cover of the publication "Olam Katan" is featured on this new stamp and underneath it, on the tab, appears the artistic design of the cover of the Hebrew Children's magazine "Olam Katan" (Small World) from the land of Israel. This was the pioneer of illustrated children's magazines, published in Warsaw in 1901, in four volumes, between 1901-1905. It remains a classic in children's literature in Hebrew, enthusiastically received by children all over the Jewish world. It was included in many newspapers over the years all of which achieved the aim of building up of a generation from immigrants of every corner of the world who learnt to speak and read one official language - Modern Hebrew!