Stamp: 150 Years of the Jewish Chronicle 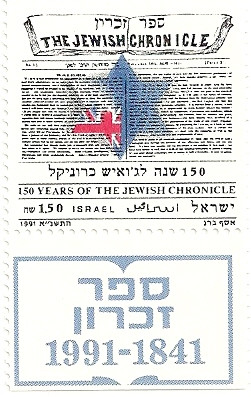 First published on November 12, 1841, under the editorship of Moses Angel and David Meldola, the "Jewish Chronicle" is today the oldest and most influential Jewish newspaper in the English-speaking world. Its aim, according to a leading article in the first issue, was to provide "religious and moral instruction; local intelligence, historical information, and facts, exclusively Jewish; original articles; and textbooks." Founded in London by Isaac Vallentine, a printer and bookseller, the "Jewish Chronicle" was issued as a weekly until May 1842, when publication was suspended. It reappeared as a fortnightly in October 1844 and as a weekly - which it has remained ever since. In 1917, the British Government postponed publication of the Balfour Declaration for several days to enable the "Jewish Chronicle" to print the news at the same time as the daily press. The paper was one of the first journals to inform the world of the Nazi atrocities during the Second World War. The Jewish Chronicle retains its pre-eminent position, having outlived every other Jewish periodical.