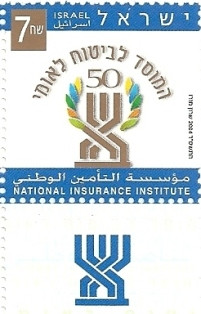 The design of the stamp issued July 2004, is based on the Jubilee logo of the National Insurance Institute (NII), produced by the Government Publicity Office designed by Studio Haimi.  The first Jewish insurance company in Palestine was established in 1923. In 1939 there were eight domestic insurers with only small own capital, the main business still being in the hands of foreign companies, mainly British. After the establishment of the State, the rapidly growing economy resulted in an equal expansion of insurance. By the end of 1967 some 28 domestic companies operated in Israel. The NII is the national institution of social insurance, operating under the National Insurance Law passed by the Knesset in November 1953. Its main role is to ensure a means of subsistence to those Israeli residents who cannot earn a living on their own.