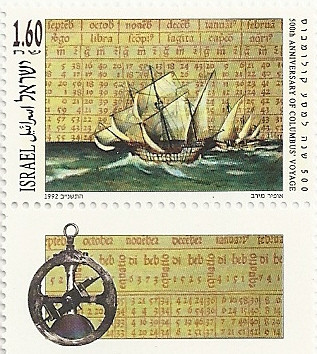 This stamp was issued in April 1992 to commemorate the five hundredth anniversary of Columbus' first sea voyage of discovery. It features two of the reconstructed models of his sailing ships, from the National Maritime Muesum in Haifa. Though opinions are diveded as to whether Columbus was of Spanish-Jewish extraction, it is undisputed that he used the charts, navigational instruments and scientific publications made at the time by Jewish astronomers and cartographers. The background of the stamp shows a page of the Almanach Perpetuum (or Calendar/Yearbook, with astronomical and navigational data, statistics, etc) compiled by the Jewish astronomer Abraham Zacut. On the tab is depicted an Astrolab: an astronomical instrument used for navigation, measuring the altitude of stars and planets.