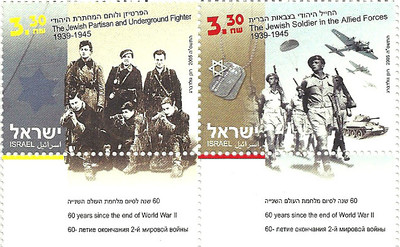 The set of 2 joined stamps issued in May 2005, memorializes the victory over inhumanity and an evil ideology unparalleled in modern history, by Jewish fighters against the Nazis and their Allies. One stamp shows a Jewish soldier in the Allied Forces, marching men of the Jewish Brigade in the British army, a Russian T34 tank, US B17 bomber and a parachutist. The Jewish soldier is represented by a picture of identiy disks of an American-Jewish soldier and a Magen David pendant. The Jewish Partisan and Underground Fighter stamp shows a group of partisans. The Jewish Underground fighter is represented by the shape of the yellow Magen David patch and identity disks, encircled by flags of the twenty-two nations that fought with the Allies.