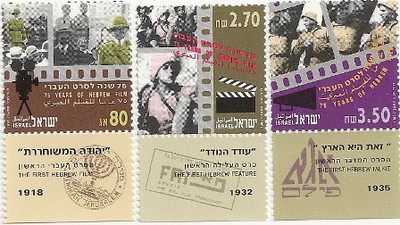 The year 1992 marked the seventy-fifth anniversary of Hebrew Film Marking, from the 1917 shooting of the first Hebrew film, "Judah Released". In commemoration of this anniversary a series of stamps were issued in December 1992 depicting scenes from three prominent films, including both silent and sound: Judah Released (the first Jewish feature film); Oded Hanoded (Oded the Wanderer: the first Jewish feature film); This is the Land (the first Jewish sound movie). At the bottom of the tabs appears the actual date on which the particular film was first screened.

Judah Released -This film documents 34 incidents that occurred during the first year of British military rule in Palestine. The opening scene featured the British army entering Jerusalem, led by General Allenby, on 11th December 1917. The shots reproduced on the stamp depict General Allenby being welcomed by the Jews of Jerusalem, Rabbis, Zionist leaders and members of the Maccabi Youth Movement, Dr. Chaim Weizmann is standing next to General Allenby.

Oded the Wanderer - is based on a children's story by Zvi Liebermann, describing the adventures of Oded, a dreamer who gets lost on a class outing. After a search he is found and returns safely. The stamp features several of the boys who appear in the film, with the star, "Oded the Wanderer".

This is the Land - combines documentary with acted scenes, depicting fifty years of pioneering settlement in Eretz Israel, starting with the arrival of the Biluim, the first pioneering movement. Several of the actors are depicted on the stamp.