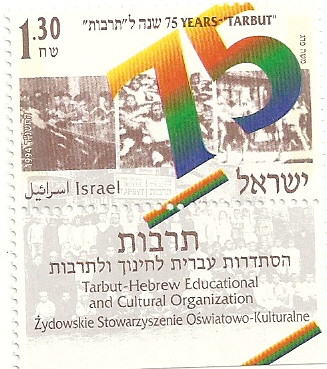 The word Tarbut means "culture" and refers to the Zionist-orientated Hebrew educational, cultural organization maintaining schools in most Eastern European countries between the world wars. The stamp, issued in June 1994, shows students of chemistry at Bialystok and an exercise class at the Tarbut School in Wolyn taken in 1919. The tab pictures students at the Tarbut School in Rovno, Poland, with the plaque of the school's name in the background in three languages - Hebrew, Ukrainian and Polish. The political upheavals following World War I, brought about radical changes in the fate of Eastern European Jews. The Jews in Russia found themselves cut off from the rest of the world, and in Eastern Europe new states were established from fragments of broken Austrian and reduced Russian empires. Eastern European Jews found themselves a discriminated minority against the specific rights granted to other groups in the educational and cultural spheres. The Zionist ideals and Balfour Declaration strengthened the Hebraist-Zionist trend in Jewish education, both in secular and religious groups, including a national yiddish movement. Amongst the Jewish schools which sprung up in Eastern Europe Tarbut represented a large school system giving emphasis to the Jewish nationalistic spirit and orientated towards pioneering in Palestine. Instruction was given in Hebrew in all subjects, excepting the study of the language of the land. The Bible was the core of the Hebrew traditional program, and modern Hebrew literature for nationalist orientation. Most of the schools were in Poland, and also in the Baltic states and Rumania.