Stamp: 800 Years since the Death of Maimonides 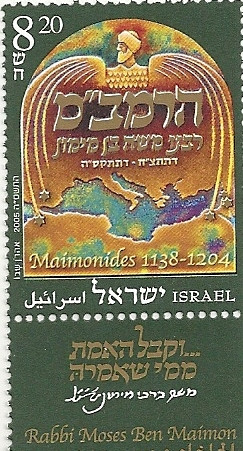 The stamp was issued in July 2005; it shows an eagle with a human head representing Maimonides who was known as "The Great Eagle." The eagle's wings expand over the Mediteranean (the area of Maimonides' residence and influence). His life's journeys from his birthplace (Cordoba, Spain) through Morocco, ancient Cairo to Jerusalem, are highlighted by Stars of David at the wings. Moses Ben Maimon, known as "Rambam," is regarded as one of the greatest Jewish "sages," scholars and philosophers of Judaism from Talmudic times and the Middle Ages onward. Extremely versatile, he is also known as a doctor, scientist and researcher. Maimonides' "Mishneh Torah," that he composed as a clear systematic code of Jewish Law, is esteemed one of the greatest works of Judaism, and his "Guide to the Perplexed" is a major philosophical work in Jewish Law. He was known aw the "Great Eagle," as if "spreading his wings" or influence, over the whole Jewish law, people and Land, illustrated by the superstitious Jewish saying: "From Moses to Moses, none arose as Moses (Maimonides)," in praise of his extensive life-work.