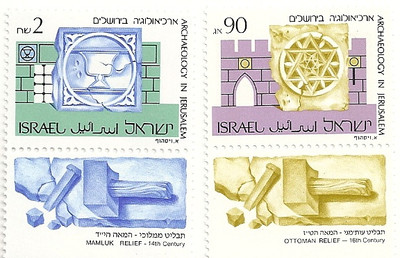 Jerusalem has been extolled and glorified since time immemorial. More than any other city in the world, it has been crowned and wreathed in praises. Yet from 2000BC Jerusalem has been besieged 27 times and conquered and razed to the ground 17 times. Scripture records 14 of the sieges. One more is prophesied (Zech 14:2).

Dedicated archaeologists, probing the secrets of Jerusalem's chequered past, have unearthed artifacts from a plethora of human cultures dating back through all ages of mankind. Since the city's very beginnings, the fine stone work of Jerusalem - its ancient reliefs and capitals - have born silent witness to the skills and pride of its artists and masons.

On the stamp, issued on 17th October, 1989, is a relief from Suleiman's Wall in Jerusalem,  built in the 16th century AD (1535-1538). The relief in limestone was found on the northern wall close to the New Gate. The decoration is composed of one Star of David placed in the heart of a larger Star enriched with entwining rose leaves. in 1517 AD Jerusalem was captured by the Ottoman Turks and Suleiman The Magnificent built the walls that still surround the Old City today.

In the 14th-15th century AD, during the reign of the Mamluks in the Holy Land, scores of religious structures were built in Jerusalem. The insignia decorating the goblet, shown on the stamp issued on 12th May, 1990, belongs to Emir Sayif Ad-Din At-Taz who was a member of the Egyptian Mamluk aristocracy. The academy which he built whose facade contains the lintel with his personal insignia is to be found in the Rehov Shalshelet (Chain Street), about 150 yards west of the Chain Gate on the Temple Mount.