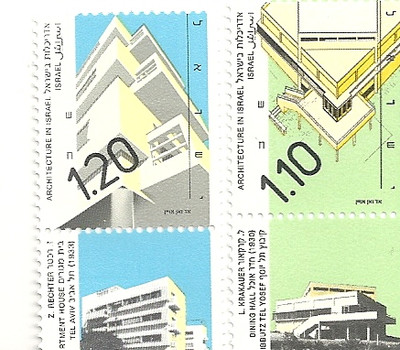 The return of the Jewish people to the land of Israel, a country unpopulated for the most part, necessitated in the planning and establishment of a new infrastructure of settlements, both urban and rural. This infrastructure would include residential housing, public buildings as well as original rural and industrial structures. The architects tried to combine features of European architecture and tecnhological innovations with the exigencies of the climatic, topographical and social conditions prevailing.

In one stamp is the dining hall of Kibbutz Tel Yosef in the Jezreel Valley designed by Leopold Karakauer. Built on a slope of a hill needing an innovate concrete frame, making it possible to build a line of windows right around the dining hall through which can be seen the Gilboa Mountains and the valley at their feet.

The other stamp depicts "Engel House" designed by Ze'ev Rechter, the first house to be built using pillars in Tel Aviv and was to 'create distance between the resident and the street'. This house became a model for many others that were built.

These stamps were issued on 12th December 1990