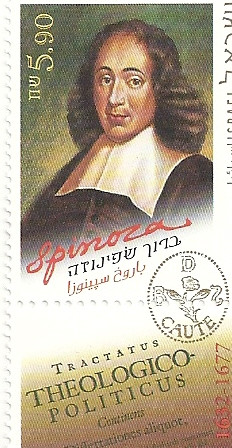 The stamp was issued in August 2002 in a series on "Jewish Contribution to World Culture in the Modern Era," for the 55th anniversary of the State of Israel. A portrait of Spinoza based on an ancient engraving is shown on the stamp tab and the front cover of his main work, "Tractatus Theologico-Politicus" with a drawing of his signet appear on the tab. The signet shows Spinoza's initials with the throns of a rose, and the word "caute" (be cautious). He was born into a Portuguese Marrano family of Jews who were forced to adopt Christianity in post-Islamic Spain, but who secretly remained loyal to Judaism. He later followed the rationalist movement, attempting to interpret the Bible by logical and scientific principles. In 1670, Spinoza published in Amsterdam his "Treatise on Religious and Political Philosophy" which rejected the Mosaic authorship of the Pentateuch, and the possibility of genuine prophecy, opening the O.T. and N.T. to criticism. Spinoza was the precursor of modern Reform-Judaism which led away from the Hebrew Old Testament Scriptures to Gentilism which brought tragic consequences upon Jewry falling victim to the Holocaust.