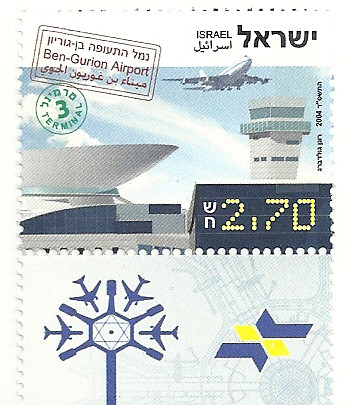 The stamp issued November 2004, presents a view of the New international Terminal 3 airport structure located outside of Tel Aviv. A huge satellite dish in the foreground boasts space age technology; an incoming jet is hovering near the control tower. On the tab an excerpt of the architect's plan of infrastructure is shown with a miniature bird's eye sketch thereof.

The Airport was originally established by the British Mandate government in 1936 and was first called "Lydda," later "Lod (Joppa) Airport," processing 40,000 passengers upon its inauguration. Today several million passengers pass through its gates annually.