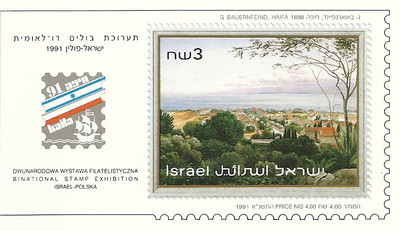 This exhibition, under the patronage of the Minister of Communications, the Mayor of Haifa and the Israel Philiatelic Federation, was hosted by the Haifa Philatelic Society duing the week of Sukkot (October 1991). It was sponsored by both the Israel and Polish Philatelic Federations. The souvenir sheet issued for the "Haifa '91" Exhibition is based on one of Gustav Bauemfeind's paintings. The painting was included in a richly ornamented album given by the Templers to the German Kaiser, Wilhelm 11, during his visit to the Orient in 1898. It portrays the German Colony in Haifa towards the end of the 19th century.