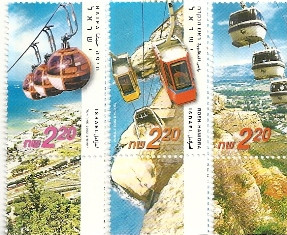 This attractive set of five stamps issued in August 2002, provides magnificent and colourful views of some famous, though rugged sites in Israel, now made more accessible by the latest technology in cable cars. Menara Cliff - Opened in 1998, the route travelled is the longest in the country, climbing from the souther outskirts of the town Kiryat Shemona to Naftali Heights near Kibbutz Menara in the Upper Galilee. Rosh Haniqra - Constructed in 1968 at the northwest edge of the Ladder of the Tyre Hills. The western side of the ridge descends into the Mediterranean Sea as a hanging cliff, 70 meters high. Haifa - This cable car connects the Bat Galim beach with Stella Maris on the top of Mt. Carmel and constructed in 1986 has panoramic view of Haifa Bay and north to Rosh Haniqra. Massada - In 1971 the first cable car was built here, enabling millions of tourists from all over the world to visit the important historical site. The system was upgraded and today consists of larger cars holding up to eighty passengers each. It climbs from the eastern valley of the Dead Sea above the Snake Path and ends at the magnificent Herod's Fortress.