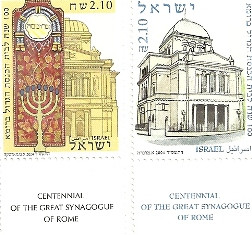 The two stamp Israel/Italy joint issue, May 2004, depict the facade of the Great Synagogue of Rome, constructed in "Neo-Classic-Assyrian" style. On one of the stamps a festoon interior decoration shows a menorah and a prayer-shawl draped over the Hebrew word "Exalt", quoted from Psa. 34:3, celebrating David's deliverance from the persecution of Saul and Abimelech, king of Gath. In 1555 Pope Paul lV forced the Jews of the Papal state into a ghetto one the edge of the city. Only one synagogue was allowed, but the Jews circumvented that by incorporating five separate synagogues (called "schoelae" - schools) into one building! Then in 1870 when Rome was incorporated into a united Italy and the Jews given equal footing to all others, the ghetto was dismantled. During the redevelopment the five scholae-building was accidentally burnt down. In 1904, a new large synagogue was opened for service on the same site. The "Tempio Maggiore," (Italian: "Great Temple"), designed by architects Costa and Armanni, was to represent a "monument symbolic of the freedom and equality of the Jews to those in Rome" and therefore built in contemporary style. Today's 15,000 Jews in Rome are scattered throughout the metropolis, making use of the Great Synagogue for worship and rallies in support of the Jewish cause.