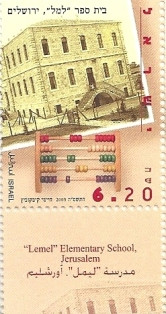 The "Lemel School" stamp shows a photograph of the School building. In May 1856 Dr. L. A. Frankel, representing a Mrs. Lift Hertz from Vienna, came to Jerusalem to establish a modern school dedicated to the memory of her father. There was great antagonism from religious Jewish groups at Jerusalem, but was supported by the Sephardic Jews.

On the "Rishon Le-Ziyon" Hebrew kindergarten stamp is a photograph of the Zalman David Levontin Kindergarten, established in 1927 as a continuation of the original Kindgergarten opened in 1898, by the efforts of DAvid Yudelevich. Hebrew education for pre-schoolers stimulated and contributed significantly to the development of stories and songs in the Hevrew language, and in turn to the progress of the nation.