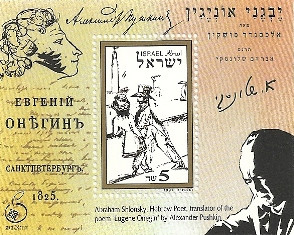 The artistically designed souvenir sheet issued in November 1997 presents at the top left a self-portrait of the poet, with his signature to the right. Under the portrait is a reproduction of the first copy of the novel 'Eugene Onegin' in his own handwriting, with the title in Russian. The actual stamp is located in the centre of the sheet, and features a sketch by the author, of himself and of his hero, leaning over the balcony overlooking the "Peter and Paul fortress." At the top right of the souvenir sheet is a copy of the title page of 'Eugene Onegin' translated into Hebrew, with Shlonsky's signature and protrait underneath. UNESCO declared the year 1999 "Pushkin Year," when the 200th anniversary of the poet's birth was celebrated. Aleksandr Pushkin (1799-1837) was born in St. Petersburg and is recognised as the greatest poet and founder of modern Russian literature. The best and most complete translation of 'Onegin' is by Abraham Shlonsky (1900-1973) who immigrated into Eretz Israel from the Ukrain in 1921 and the reason for the Israeli stamp. He is among the founders of modern Hebrw poetry, and combined new forms with traditional Hebrew of various periods.