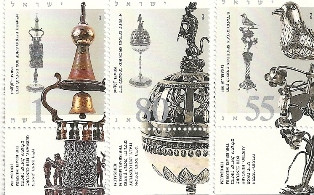 Set of 3 stamps issued in 1990 are of spice boxes in the Israel Museum, Jerusalem. The boxes are from Austro-Hungry, 19th century; Italy, 19th century and Germany, 18th century.

Spice boxes take various forms, the most common of which is the turret or spire, though they also exist in a other forms: globe-shaped, fruit on stalks, birds with wings extended, fish made of silver segments, but the turrent-shaped spice box is by far the most dominant artifact for holding spices in the "Havdala" ceremony.