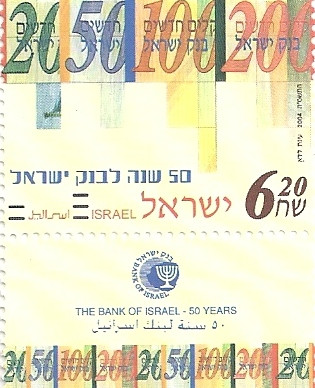 The stamp issued December 2004, designed by third year student Einat Lida, Emunah College, Graphic Art Sect., shows cubic representations of four IL (Israel lirah) valued from 20-200 pounds. On the tab the Jubilee stamp - a menorah and the words "Bank of Israel, 50 Years" appear in Hebrew, English and Arabic.  The Central Bank of Israel was established by law, passed in the Knesset on August 24 1954, taking effect from 1st December that year, when the Bank started its operations. With sole right to issue currency, it replaced the Bank Notes Ordinance of 1948, enacted after the establishment of the State, in a charter between the Government and the Anglo-Palestine Bank which later became Bank Leumi Le-Israel. The Anglo Palestine Bank served as a subsidiary of the Jewish Colonial Trust, originally founded by Theodor Herzl.