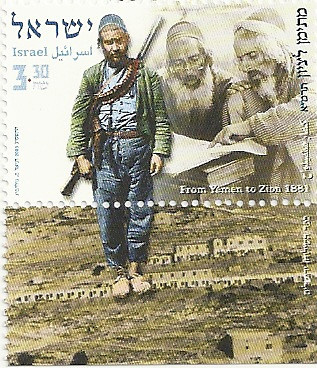 The stamp issued April 2003, highlights aspects of Jewish religion and active Zionist commitment illustrated by two photgraphs - Yemeni Jewish immigrants reading the Torah, and an armed guard at Ben Shemen (Youth village and moshav [communal agricultural settlement] at the Judean foothills, 3km east of Lydda). The tab shows a photograph of the first sixty houses built for these immigrants in Kfar Hasiloah on the slope of the Mt. of Olives outside Jerusalem.

Few Yemeni Jews settled in Palestine before the 19th century as it was not until 1872 that the Ottoman Turks conquered Yemen and annexed it to the empire, Palestine then being under Ottoman control which facilitated travel between the countries. Yemeni Jews returned because of their keen Messianic expectations.