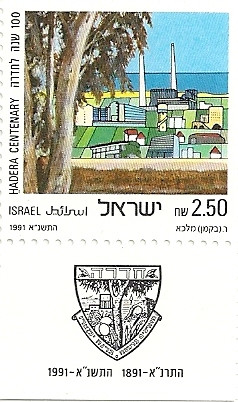 Issued on 19th February, 1991. Hadera was founded in 1891 in the northern Sharon area by four Zionist groups of Russian Jews. The land was swampy and infested with malaria which caused a high mortality rate among the pioneers and their families. Eucalyptus trees were planted but did not help, and the swamps eventually drained by making canals. An important landmark in Hadera is the K'han building. In this large sandstone farmhouse, Hadera's founders lived for six long years, before the Turkish authorities issued building permits for their homes. Today the historical "K'han" museum of Hadera is located in the remains of the old building. The name "Hadera" is derived from the Talmudic name "Gedera" and the Arabic "al-khadra" meaning green and referring to the green swampy landscape.