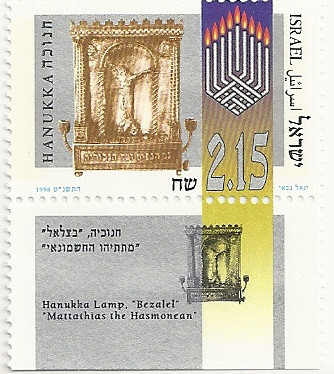 The Hannukka candelabrum shown on this stamp, issued in January 1999, has at its centre an impression of Mattathias the Hasmonean, and above the inscription "For the Miracles and for the Mighty Deeds . . ." The lamp shows the development of the Hanukka festival, from the time of  Mattathias to the custom of celebrating the festival by lighting eight candles, with the same prayer. The candelabrum was scupted by Boris Schatz, court scuptor to King Ferdinand of Bulgaria, and founder of the famous Bezalel Academy of Arts in Jerusalem in 1905. The stamp features a candleholder on each side, after the custom of the Middle Ages in Europe, and the Middle East where two extra candles were lit - one for the lighting of the eight ceremonial candles, and a second for additional illumination.

Mattathias, the Hasmonean, which was a priestly house of a group called "Hasidim: who were extremely zealous for the Law. He was from the village of Modi'in, in the district of Lydda, was the first leader of the uprising against Antiochus IV Epiphanes (167BC). He is described as the son of Johanan, son of Simeon, son of Asamonaius, priest of the family of Joarib (1Chr.24:7) who moved away from Jerusalem and settled in Modi'in, in Judea. Later the name "Asamonaius," or "Hasmonean" became a family title.