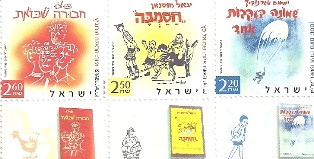 The three pastel-coloured stamps issued August 2004, each provide the original illustrations that appeared on the front covers of the books when first published, and repeated in miniature on the tabs. These adventure novels distinguish themselves and complement each other through their national character, for the actions of all three narratives take place during the British Mandate period, just prior to the establishment of the State of Israel. Patterned on the background of fighting Jewish Underground Movements, the adventurous exploits of "Secret Society Youth" are embellished by Zionist ideals of patriotism, comradeship, courage and self-reliance through hardships under persecution from "enemies of the Jewish State."

"Eight on the Trail of One" - by Yemima Avidar-Tchernovitz, published in 1945. It is known as "the first Israeli adventure story." A group of kibbuts children become involved with a stranger, Dr. Berg, who tries to give the impression to them of a modern "Dr. Doolittle."

"The Hasamb" Series - by Igal Mossinsohn. published in 1940.  All about a "secret society" and how the group successfully battle against their country's enemies and spies etc. This series proved very popular and have become a part of Israeli culture.

"Our Gang" - by Israel Wissler published in 1958. Describes the experiences of a group of rather exuberant Palmah young people training in a kibbutz just prior to the establishment of Israel.