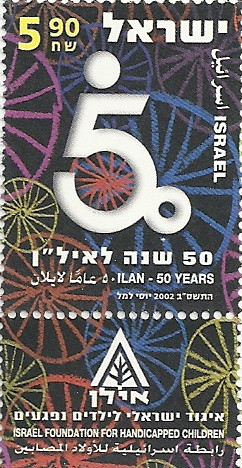 The stamp, issued April 2002, commemorates the 50th anniversary of the "Israel Foundation for Handicapped Children," and depicts the logo and emblems of the organization on stamp and tab. Ilan is the acronym for three welfare organizations which amalgamated in 1964. Originally Ilan was founded in 1952 for assistance to polio victims until, in 1964 the polio epidemic was stopped. Over 15,000 handicapped children and adults suffering from various diseases are helped by Ilan. The organization arranges for rehabilitation and welfare activities as well as cultural events. Also aid is provided for the disabled and their families for the purchase of educational and rehabilitative equipment. The benefit to the nation of welfare organizations such as Ilan must be recognized, considering that at the beginning of the 19th century the Land was ridden with disease, and wide areas were infested with deadly infectious diseases that took a heavy toll on the population. The British Mandatory Authorities mainly concentrated on malaria and smallpox control, and their elementary preventive health services served mainly the Arab population, while Jews had to provide for their own.