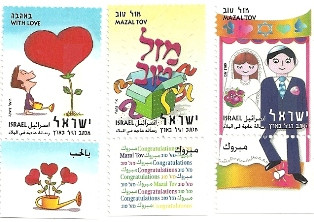 Colourful greeting stamps are depicted in two sets of three stamps each, issued in April and June 2003, displaying five popular greetings in word and illustration, suitable for most occasions in Israel and Western countries. While greeting cards as we know them today, are the products of a relatively modern society, the custom of sending greetings to one by word or letter had existed from ancient times. Traditional Jewish greetings were mostly adaptions of biblical verses or Judaistic liturgy.