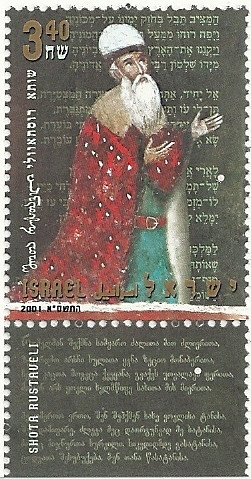 The joint issue of September 2001 depicts the Georgian poet Shota Rustaveli wearing the robes of a Minister of State. In the background, the first page of his poem "The Man in the Tiger's Skin," appears, written in Hebrew, and an extract of the poem in the original Georgian language is featured on the tab. As Jewish heritage in Georgia has a history of above 2,600 years, the Israeli stamp of this joint issue is dedicated to the Georgian national poet. The Hebrw version of the poem was published in 1969, after approval by Israeli poet Avraham Shlonsky, literary editor of the Hebrew version of the poem, who classed it as the greatest work in Georgian literature. Outstanding in originality of thought and expression, its moral teachings still are, after 800 years, treasured by the Georgian people. Most details of the life and work of Shota Rustaveli remain unknown; except that he was advisor and finance minister of Queen Tamara (1184-1213). He maintained close connections with the Monastery of the Cross at Jerusalem (today belongs to the Greek Orthodox Church), where the portrait of the poet, shown on the stamp was found. Rustaveli lived in the monastery during his latter life and is buried in Jerusalem.