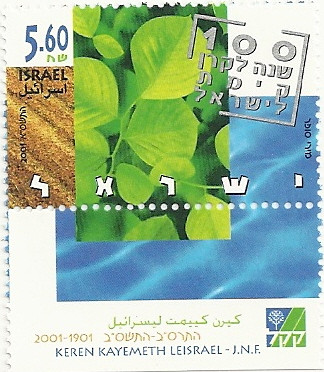 The unique centenary issue of September 2001 presents a colourful combination of three stamp sections in one: Brown soil - preserving, reclaiming and developing the land. Green tree leaves - combating desertification, restoration of river beds, planting forests and developing parks and recreational sites. Blue waters - assisting in ways to increase the water supply. Concept of the JNF dates back to the first Zionist Congress where the need for large scale immigration to the land was recognised, and the Zionist Organization was founded. Meanwhile a number of settlements established in Palestine by the forerunner of the Zionist Organisation, "Hovevei Zion," had proven the ability of Jews to farm the land. Finally, the JNF was officially established on December 29, 1901, at the Fifth Zionist Congress in Basel, Switzerland as a Zionist National Public Fund to enable Jews to resettle in their homeland. Settlements established on JNF land, afforestation projects and gradual property development determined, to a large extent, the borders of the State established on May 14, 1948. The national role of the JNF increased in 1922, when the British Mandate permitted establishment of a Zionist Settlers' "self-government," appointing a "Jewish Agency for Palestine" which represented settlers before the British Administration in all matters concerning establishment of a National Home in Palestine. The Jewish Agency was supported by "Karen ha-Yesod" (Palestine Foundation Fund) the financial sector of the National Institutions, and the JNF, responsible for purchasing, reclaiming land for the Yishuv, for settlement and afforestation. It's main efforts centered on bringing Jews to Israel, and providing assistance in their new circumstances.