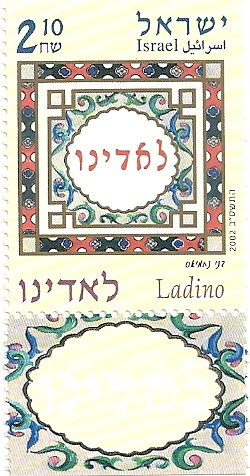 The issue of February 2002, shows the word "Ladino" written in Rashi script in the centre of intricate motifs and artwork from the ancient Spanish writings, on the stamp and tab. Judeo-Spanish formed part of the Romance languages, an adapted form of Latin developed in the Middle Ages. Ladino is an archaic form of 15th century Castilian Spanish, mixed with Hebrew, which eventually absorbed Arabic, Turkish and Balkan elements, and from the 19th century was also influenced by French. Originally Ladino was written in adapted Hebrew script, preserving the original "f" and "g" sounds, and replaced in modern Spanish by an unpronounced "h". After the Jews were expelled from Spain in 1492, they fled to Nth. Africa and other parts of the Turkish empire, and to England and Holland. After expulsion, the Spanish and Hispanic dialects spoken before the classic Age of Spanish literature, were retained by the exiles and developed into a specific form of Jewish ("Sephardic" from Sepharad, Spain) language, preserved for over 500 years.