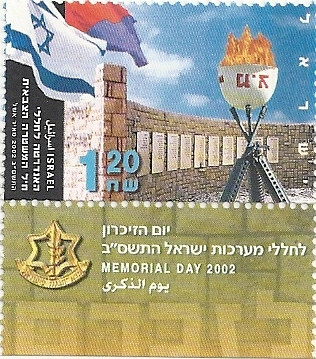 The stamp issued for Memorial Day, April 2002 features part of a stone enclosure constructed in the shape of the Military Police Corps emblem displaying a row of plaques in memory of the fallen. Towering over the building, an eternal flame in a police helmet contrasts with a blue sky and waving national flags in the left-hand foreground. The site at Kefar Yona includes a library. The Military police Corps, called "The Watchmen" was established legally with the assistance of the British in 1936 to protect Jewish settlements from Arab rioters. However graduates of the first course for military policemen joined in the national struggle against the Mandate Authorities as well as against the Arabs. During the War of Independence Military Police units assisted IDF fighting units in various operations as well as protecting Jewish settlements. Since its establishment over half a century ago, the Military Police Corps has developed many professional skills for duty in times of peace and war - in areas of investigation, training, policing and maintaining prisons. The Corps operates in accordance with the general standards of the IDF.