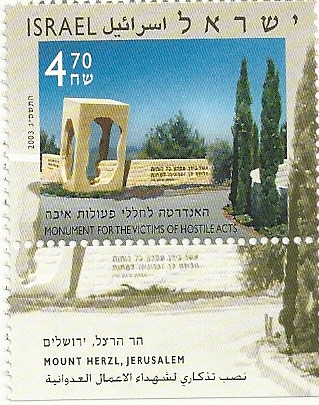 On the stamp issued February 2003, a unique monument is depicted, inaugurated in 1998 on Mt. Herzl, Jerusalem, to commmorate the stand of the Jewish People against those who plot to eradicate their existence. Arab hostilities against Jewish settlement in the Land of Israel have continued with increasing violence and bloodshed down to our present day. This terror prior to the establishment of the State of Israel, was designed to weaken the spirit of Jewish settlers and to thwart any plans of re-establishing a national homeland in Palestine. After the Declaration of Independence establishment, their efforts concentrated on the destruction of the State, not by open conflict, but by underground guerilla warfare. This long and bitter struggle has claimed the lives of many civilians and soldiers because front line and home front have been brought right into the heart of national and civil life, where it is most vulnerable and impossible to defend without serious consequences. The high toll of innocent civilian victims and of soldiers killed in the battles of Israel equally testifies to the high price the State of Israel has to pay to guard its independence. The memory of the Fallen is a national duty of the State toward those who gave their lives in the struggle for their country.

The monument was built by the National Insurance Institute and the Ministry of Defence in cooperation with the Organisation of Israel's Terror Victims, the legal representative of the bereaved families. It was established to assist the victims in their efforts to cope with the difficulties suffered following the tragic circumstances.