Stamp: NO! To Violence 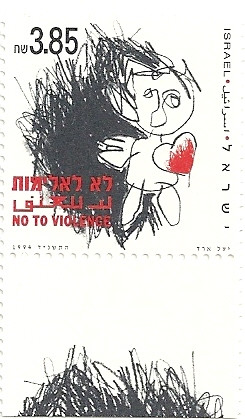 The design of this unusual stamp, issued in April 1994, is based on the primitive drawing by a child-victim of violence, portraying the psychological effects of such trauma: a puffy face with a swollen eye; awkward body, and limbs out of proportion. In the foreground, the blood-red appeal of a wounded heart, held out, speaks of intense unhappiness; piles of jammed-up black scribbles add to the picture of bewilderment and frustration. The stamp directs attention to the phenomenon of violence in modern Isarel. This is somewhat of a paradox when the Jewish trauma of the Nazi Holocaust and the spectre of Anti-semitism are remembered. Violence on the increase in Israel contravenes the concept of Zionist ideals of a better order of things through the spiritual rebirth of the Jewish nation, promising its citizens the hope of a better order of things! But today, the Land presents a cameo of modern cosmopolitan society where few of the orthodox ideals remain with all the consequences of modern life-style. It is revealing the Gentile spirit of violence where the Law of God should be upheld.