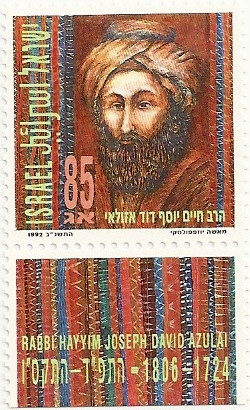 This stamp was issued in April, 1992. The HIDA was born in Jerusalem in 1724 to a well-known family. From an early age he showed himself to have outstanding intellectual abilities, and was recognised as one of the most eminent Torah scholars of his time. He was head of a Yeshiva and was greatly respected and admired by all the students, and before the age of 30 was appointed as rabbinical emissary and travelled overseas to raise funds for the community. He was the first Jewish scholar to examine the Hewbrew manuscripts in the libraries of Italy and France and at the early age of 18, he wrote an article entitled "He'alem Davar" - "Something missing", in which he showed that some of the greatest teachers had been wrong on account of their faulty knowledge of chronology and bibliography. He used this as a basis for his later writings on the Mishna, the Talmud, the Passover Haggadah and others.