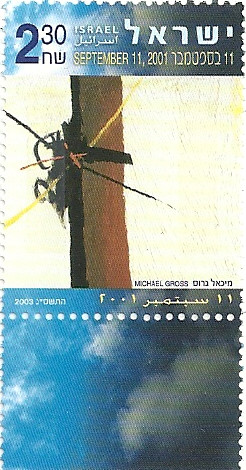 The stamp issued in February 2003 shows the centrepiece of a modern-style painting first displayed at the Israel Museum, Jerusalem in 2002. A brown, mast-like vertical structure representing the twin towers, stands stark in the blank space surrounding it. In the centre it is marked with sharp yellow and black X-lines shooting out from it, representing the action of complete strike off and obliteration. Hard against the centrepoint of the X-line crossing is poised a small red airplane - representing the inevitable! Poisonous-looking clouds of smoke rise against a blue sky, shown on the tab. A year after the terrorist attach on the twin towers in New York City, Prime Minister Ariel Sharon made a speech at a solidarity ceremony to the American people and the families of the victims: ". . . A year has passed since September 11th, when the clock of history stood still at the World Trade Centre in New York, at the Pentagon in Washington and in Shanksville, Pennsylvania. A year has passed since the assult by the forces of terror and evil, an assault which claimed the lives of thousands of innocent civilians, and sowed unprecedented and massive destruction. An assault which positioned the strategic threat of terror to the values, culture and very existence of Western democratic society at the core of world awareness . . . I recall one unforgettable image from that day: amid the sirens, destruction and smoke which engulfed the City of New York immediately following the collapse of the towers, a camera lens captured the Statue of Liberty and her torch - symbols of the spirit of America - standing steadfast. On this day we stand together with the American people: we remember, grieve and will never forget!" The terrorist attack on America occurred because of American cooperation with Israel, as stated by the aggressors; the attack is therefore against the God of Israel who will vindicate His people.