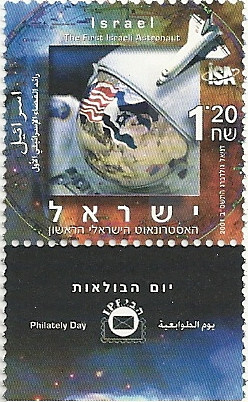 The special stamp for Philately Day, December 2001, shows an astronaut's helmet with the planet earth, the Colombia space shuttle and the American and Israeli flags reflected on its visor. In the background is a sketch of the stars of the galaxy together with a picture of space taken by the Hubble telescope and the symbol of ISA (Israel Space Agency). On the tab is a picture of space taken by Hubble and the symbol of the Israel Philatelic Federation are featured. The flight of Israel's first astronaut into space on a NASA space shuttle was an agreement between the Israeli Space Agency and the American National Aeronautics and Space Administration reached in 1996. The purpose of the flight was to perform the "Mediterranean Israeli Dust Experiment" as part of the international research effort into global climate change. Israel air force pilot Colonel Ilan Ramon was selected to carry out this important mission. During his space flight over the Mediterranean area he operated a camera that images aerosol particles in the atmosphere in several different wave lengths. An additional feature of the experiment is that the Israeli astronaut monitors from space during night time a newly discovered phenomenon in the upper atmosphere, associated with severe thunderstorms, which scientists have names "sprites". The general public and schools were kept informed concerning the experiments and flight of the first Israeli astronaut, to create awareness and understanding of these important activities carried out in space by Israeli reasearchers and their colleagues worldwide.