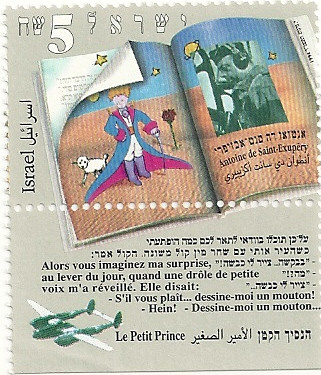 This beautiful stamp, issued in June 1994, shows the open story book with the photo fo the author, Antione de Saint=Exupery, in the cockpit of a plane. On the other page the "Little Prince" is pictured with a sheep and rose, the two main fantasy characters of the book, and golden stars light up a blue sky. An extract from the Hebrew text is revealed on the next page. On the tab the famous passage describing their first meeting is quoted in French and below is pictured the B-38 aeroplane in which Exupery was killed. The unusual, and charming children's storey "The Little Prince" made its author world-famous and was first published in 1943 in USA where Exupery had transferred from Nazi-occupied Europe. The preface dedicates the book to his Jewish friend "Leon Werth, my best friend. He is a grown-up and lives in France, where he is hungry and cold and needs cheering up." As a true artist, the author transforms his own experience of an emergency landing in the Sahara in 1935 while attempting to break a world flying record, into a story of poetic imagination and beauty with undertones of nostalgia for excape from the trauma of war to a more peaceful world.