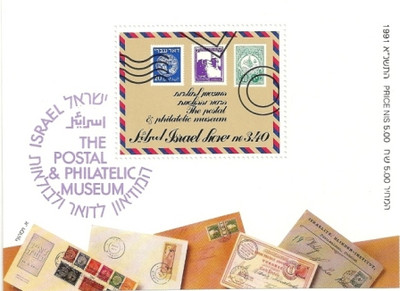 The souvenir sheet parades the recent history of Eretz Israel. Depicted from the left are stamps from the Ottoman Turkish dominion through the period of the British mandate to the beginnings of the reborn nation of Israel, it was issued on 11th August 1991. These are a wonderful testament of the fulfilment of Bible prophecy. Turkish rule over Palestine ended in 1918 completeing the most important stage of the prophetic drying up of the Euphratean Power Rev. 16:12. The 30 years from 1918 to the national rebirth in 1948 saw the building up of the body politic of the nation as seen in Ezekiel's dramatic vision of the valley of dry bones  in ch. 37. The Balfour Declaration (1918), the vote of the League of Nations (1922) supporting a British mandate over Palestine and the historic vote of the UNO on the 29th Nov. 1947 were all phases contributing to the rebirth of Israel. All 3 stamps could well have been issued in the short space of 35 years indicating the spead of which prophecy has been fulfilled in this 20th century.