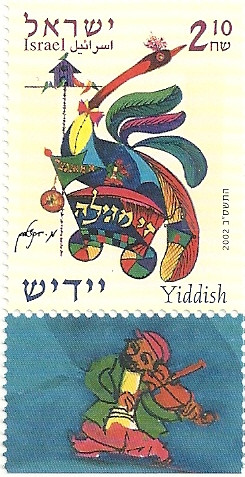 The stamp issued February 2002 displays a fantasy-inspired peacock, theatrical symbol as pictured on a poster advertising Itzik Manger's Yiddish play: "Di Megile" (Lieder-Songs), a poetical adaption of the book of Esther. A klezmer, typical Ashkenazi entertainment artist is pictured on the tab. Yiddish has been the spoken and written language of the majority of East European (Ashkenazi) and West European Jews for over a thousand years. It includes elements of German, Hebrew-Aramaic, Ladino (Judeo-Spanish), Slavic and mixed ("international") vocabulary. Generally, grammatical rules are employed, subject to modifications. The Yiddish language began in the 10th century when Jews from northern France settled in the Rhineland and later spread throughout the Germanic area to Slavic terrotory. The Slavic languages exercised a great influence on Yiddish. Yiddish drama originated in the Middle Ages when mimics and professional entertainers performed at weddings and Purim celebrations, enacting particularly the downfall of wicked Haman before the Jews.