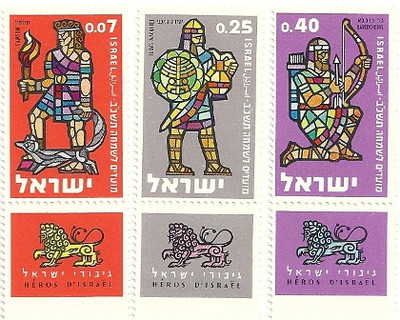 The opening of the Jewish New Year in 1981, is commemorated by a set of stamps issued on August 21st with the inscriptions: "Joyous Jestivals 5722", and the individual inscriptions of Samson, Judas Maccabaeus, and Bar Kikhba. The motif on the stamps shows symbolic drawings of these three national heroes, who in their day were all revolutionaries.

Samson - is shown with a torch and a fox, illustrating the story of Judges 15 when he burned down the corn of the Philistines in retribution of their action against him.

Judas Maccabaeus - was the greatest of the Maccabees. He was of the family of Mattathias, who raised the standard of revolt against Antiochus Epiphanes, and ultimately secured political independence for Judah.

Bar Kokhba - signifies "Son of a Star". He was the leader of a Jewish revolt against Rome in the time of Hadrian (AD132-135), who set himself up as the Messiah of his people.