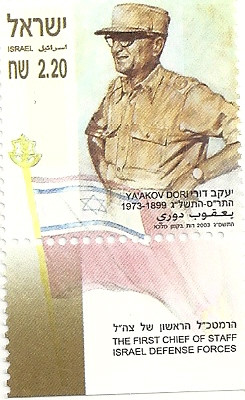 The stamp issued April 2003 shows the Commander attired in combat uniform behind the national Israeli flag, surveying the field before him. Ya'akov Dori was born in Odessa, Russia and immigrated to Palestine with his family in 1904. After graduating from the Reali High School in Haifa, he served as a sergeant in the Palestinian Batallion of the Jewish Legion in WWI. In 1925 he graduated in engineering from Ghent University, Belgium and on his return to Palestine joined the Hagana where he was actively engaged in many operations of the time. Between 1945-47 he raised funds in the USA for purchase of arms for the Haganah and as head of the national command training bureau he became the first chief of staff of the Haganah, and after the establishment of the State, was appointed chief of staff/major general of the Israel Defence Force.