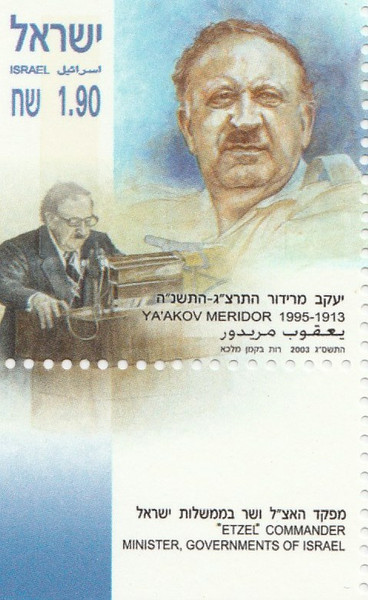 The stamp issued April 2003 portrays Ya'akov Meridor in khaki uniform against a clear blue sky. On the bottom left of the stamp a small black and white photograph shows Mr. Meridor seated at a desk before an apparatus. Ya'akov Meridor was born in Poland and after immigrating illegally into Palestine, joined the Betar and Etzel military troops, serving as commander. In 1943 Meridor was involved in an attempt to establish a union of all Jewish fighting organizations; he delegated his postition as Etzel commander to Menachem Begin in 1944 who appointed him second in command. In 1945 Meridor was arrested and transferred to prison camps in Africa from which he escaped five times and was recaptured. On his sixth attempt he succeeded in reaching Israel - the very day of the establishment of the State! Menahem Begin called him "the Escape Champion" and his escapes are described in his book "Long is the Road to Freedom." In 1948 he participated in the founding of the Herut Movement with Menahem Begin and other Etzel commanders. Then he became a member of the first to the sixth Knessets and involved in economic matters in Africa and other countries. He was active in the founding of Gahal (Herut/Liberal) and Likud political parties. In 1981 he returned to the 10th Knesset on the Likud list and was Ministe in the governments of Menachem Begin and Yitzak Shamir.