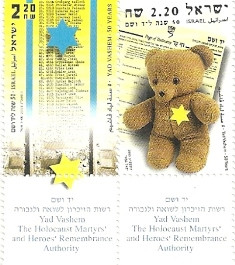 The set of two stamps issued September 2003, depict a teddy bear wearing the yellow Star of David, superimposed on the face of a document, issued by Yad Vashem, called "page of testimony". The "Forced Jewish Laborers" stamp presents a list of workers in the "Hassag" factory, Skarzysko Kamienna, Poland. The stamp teddy bear motif commemorates a toy that accompanied a young girl during the Holocaust while she and her family were fleeing from Transylvania to Siveria. The few survivors of the Jewish laborers were sent to Treblinka death camp indicated by the blue railway lines pictured on the stamp. Yad Vashem was established in 1953 to officially commemorate the six million Jews murdered during the Holocaust  The task of the Organisation is to collect all Holocaust-related documentaries and visual material, including the names of victims, to provide information to the public about the Holocaust, te encourage research, publications, and to perpetuate the victims' memory for coming generations.