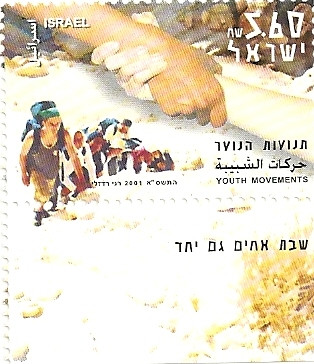 The July 2001 stamp issue, depicts members of a youth group carrying camping equipment, hiking through desert country. Above the group appears the emblem of a helping hand; the tab shows the insignia of the Israel Council of Youth Movements. Pioneers of the Second Aliyah were mostly in their early 20's. In the Land, they organized themselves into groups, moved by Zionist ideals, and protested against condidtions in the existing Jewish colony. It was not until the late 1920's-30's when settlement on the land had become a vital necessity, that organizations of working youth were founded. In the 1930's-40's these youth organizations proved a valuable support to the Jewish colony in matters concerning immigration, agricultural land settlement, establishment of kibbutzim and others. After the establishment of the State, pioneering Zionist youth groups headed by the Israeli Council of Youth Movements, unitedly consider and discuss, relevant issues in education, youth involvement in society, public activity and current events and related matters. Members are involved in community training programs and activities. Communal outings as depicted on the stamp, camps, tours and trips form part of the movements' political/social education scheme of Israel's youth, in preparation for good citizenship. The aim is to develop the qualities of responsibility and national loyalty in the youth members.